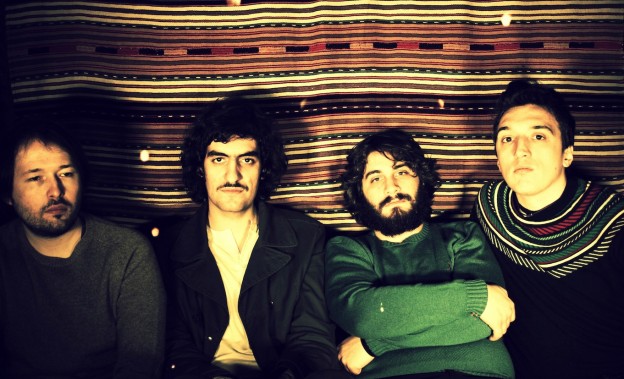 What was the most wonderful gig you ever played?
Well, it’s hard to say, we played a lot of amazing gigs around Europe, it’s difficult to say just one show. I can mention the Primavera Sound Festival in Barcelona, it was great be there, on a big stage in a big and important festival, one of the best festivals in Europe. Another special show was when we played for the first time in Paris, at La Mecanique Ondulatoire, there was a cool crowd excting our show.

Where would you absolutely love to play?
We’d love to play in big festivals like Glastonboury or Austin Psych, in Japan too!

Please describe your worst studio experience.
We love to work in studio, we love experimenting sounds and new things. The worst studio experience is when you can’t find what you’re searching for and the people who work with you, it could be a producer, and engineer, he can’t understand and help you. Those are the worst moment inside a studio.

What would your music sound like if Elvis had never existed?
I think our music wouldn’t play! I think that without people like Elvis, Lennon, Dylan and many more our lives would be completely different. I can’t imagine…

Which ringtone do you use?
Sometimes I tried to use a song, but after a week I was starting to hate it, so now I use the classic Nokia ringtone.

The most beautiful love song ever is called…
It could be “God Only Knows” by Beach Boys, or “Mother” by John Lennon.

Which song (except your own songs) do you know by heart?
“Octopus” by Syd Barrett, I know all the chords and words, I play that song a lot of time.

Which Beatles song deserves a decent cover (by you)?
We did two covers of The Beatles, “She Said She Said” and “Love You To”, the last one is a recent release. But one day maybe we’ll record “Baby You’re A Rich Man”, it’s fucking insane…

Which TV show is essential?
Sport and Music.

Please tell us your favourite joke.
„Supercazzola“, a florentine joke, going like this: Talking with a friend with nonsense words, acting like you’re talking about real and important things.

What would you be today if you had not become a pop star?
Gardener or shepherd.

In which band would you like to play (except your own)?
Happy mondays!

What’s your favourite instrument?
I love all instruments, if I must say just one I say bass.

The most beautiful woman/man in showbusiness?
Scarlett Johanson, she’s beautiful and she’s got a good voice too!

How would you spend an unexpected gift of 1000 Euro (you’re not allowed to invest in alcohol, cigarettes, drugs, holidays or prostitution)?
A big big party for all of our friends!