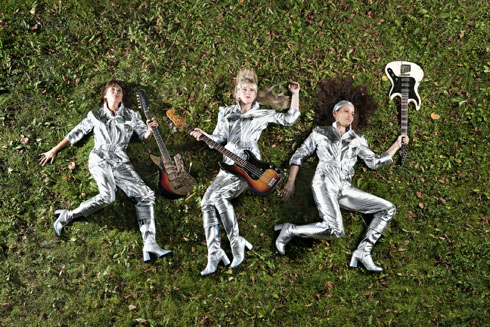 What was the most wonderful gig you ever played?
Last week on Taresia in the Delta Quadrant. The Taresians have 6 pairs of ears. We had a great party and they had at least 6 times as much fun.

Where would you absolutely love to play?
Where no man has gone before.

Please describe your worst studio experience.
Never had one. Studio is like holiday for us.. a little R&R during our many missions.

What would your music sound like if Elvis had never existed?
Extremely original.

Which ringtone do you use?
Chewbacca’s Growl

Which song (except your own songs) do you know by heart?
Oh, masses. Before I became a space commander, I was a street busker so my brain is filled with piles of songs that adamantly refuse to make way for more relevant pieces of information.

Boxer shorts or briefs?
Don’t wear either but boxers might be better under a space suit. More air circulation?

Which Beatles song deserves a decent cover (by you)?
Bad Boy – well, they covered it too but good taste never gets old.

Which TV show is essential?
No TV transmission in the rocket unfortunately…

Please tell us your favourite joke.
(One short, one long – you choose)
1. Two balloons are flying through the desert. ‘Watch out!’ says the first balloon ‘Cactussssssssssssssss’
2.Darth Vader and Luke Skywalker are arguing about whether Lord Vader can really be Luke’s father.
‘It is true, Luke. I am your father’ says Vader.
No, no.. I don’t believe you’ wails Skywalker Jr.
‘It is true. And I can prove it.’
‘Luke,‘ says Darth Vader ‘I know what you’re getting for Christmas’.
‘How?!’ cries Luke.
‘I felt your presents…’

What would you be today if you had not become a musician?
Wealthy, respectable, successful and probably extraordinarily bored.

In which band would you like to play (except your own)?
The Stax House Band.

The most beautiful woman in showbusiness?
William Shatner.

How would you spend an unexpected gift of 1000 Euro (you’re not allowed to invest in alcohol, cigarettes, drugs, holidays or prostitution)?
Rocket fuel for our trip to Mars.