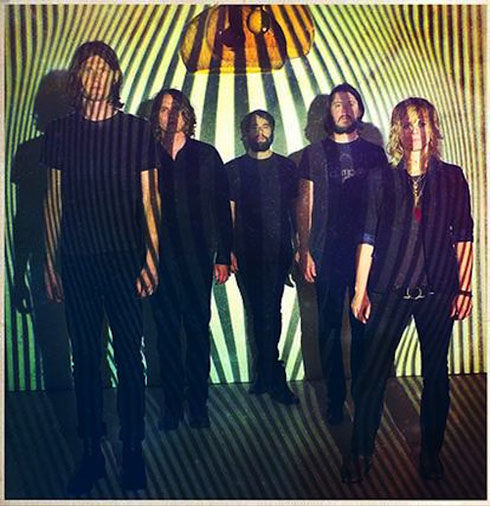 What was the most wonderful gig you ever played?
Route De Roc.

Where would you absolutely love to play?
The moon in the outer space.

Please describe your worst studio experience.
I fell into Stephanie’s drum kit in Berlin and my pants fell down.

What would your music sound like if Elvis had never existed?
It would sound less like Suicide.

The title of the book that touched you most is?
Yiddish Policemen Workers Union.

Which ringtone do you use?
Rooster.

The most beautiful love song ever is called…
Dream, by Buddy Holly.

Which song (except your own songs) do you know by heart?
Blue Flowers, Dr. Octagon .

Which Beatles song deserves a decent cover (by you)?
Tomorrow Never Knows.

Which TV show is essential?
PBS.

Please tell us your favourite joke.
What is a musician without a girl friend? answer: (Homeless)

What would you be today if you had not become a pop star?
HAAHAH, Im a pop star? I guess I would be a painter.

In which band would you like to play (except your own)?
–

The most beautiful woman in showbusiness?
Erin Wasson.

How would you spend an unexpected gift of 1000 Euro (you’re not allowed to invest in alcohol, cigarettes, drugs, holidays or prostitution)?
I would find the coolest guitar I could for the price, is that cliche?.

You made a rather abrupt change in style with your latest record. Was it a decision a priori, or just a natural result after writing the new songs?
It was probably a mix between both. Sardy encourage us to try new things, I would say he was a factor in our direction