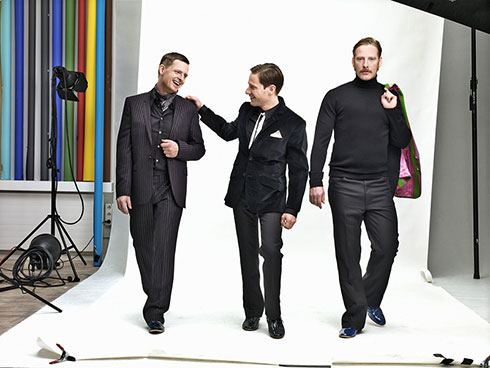 What are the first things you associate with Stuttgart?
It’s that I’m gonna name my first son stuttgart. So, it’s feelings that
I first associate with this city!

Please describe your most embarrassing moment on stage.
Well, in Bern when our beloved Doepfer refused to work, we had to stop the concert in the middle of it… and it never really kicked off again. We tried every trick in the book to re-vitalize the beast… and finally it was just unplugging it and re-plugging that was the problem and the only thing we forgot to do…. uff how embarrassing! :)

Can you list all the things you lost on tour?
Lost a lot of braincells….

We’d love to hear from you that your latest record isn’t your best one.
hehe right!

Which was the last movie you saw in cinema?
„God Bless Iceland“ an amazing documentary about the fall of the Icelandic economy.

Which was the last album you bought?
I bought the latest MÚM album online. I have my friend Gunni in that band that I need to support!

Which was the last book you threw into the corner?
„After Dark“ by Murukami.. but I always pick it up again!

Which song makes you run on the dancefloor?
The ones I have not heard before and cut deep into my heart! Then
feeling go out that usually stay inside!

Why are your concerts the best ones?
Because they are greatly improvised and always come fromt the heart.

If your music was food, what would it taste like?
Dry Fish with butter.

Are the Beatles overrated?
I’m not in the position to answer that as I have never heard them properly.

Your greatest mental defect?
Too many to pinpoint one.

Which question do you absolutely want to be asked?
You just asked this one earlier. Q nr. 4

Why are so many good bands from Iceland?
Because we don’t think about what the others are doing.