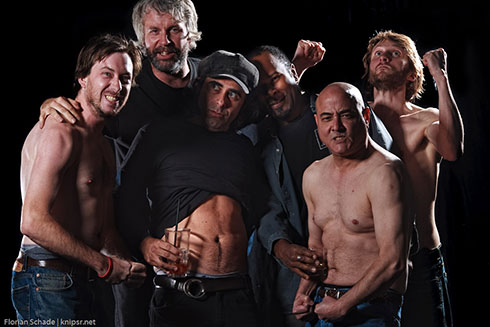 What are the first things you associate with Stuttgart?
Nudity!

Please describe your most embarrassing moment on stage.
Being next to a fully nude Isaiah is one, but after touring with both Andy and Isaiah nothing is embarrasing anymore.

Can you list all the things you lost on tour?
Too long of a list, but from Jackets to money to the entire tour bus you name it. But mostly I guess I lose my mind every tour!

We’d love to hear from you that your latest record isn’t your best one.
Everyone loves to hear that and that is why we keep on making records.

Which was the last movie you saw in cinema?
It’s been so long I can’t even remember.

Which was the last album you bought?
Actually bought? In Europe I think it was a Kinks best of record and at the same time a cd of „vive le trance“ by Amon Düül II. Usually I trade with friends which in turn lets me trade with other friends. Or it might have been getting back some Who records that got destroyed/warped like „The Who sell out“ and Live at Leeds“ and also a record called „Power Plant“ by „The Golden Dawn“. Great record, especially if you like the 13th Floor Elevator.

Which was the last book you threw into the corner?
A book called „Dark Places“, it’s about the sole survivor of a mass family murder who is finally realizing that the murderer, her brother, might not be the killer after all. I am still reading it so I have thrown it in the corner many times this past month. My lady works at a book store so we get the un-proofed versions before they get released, all mis-spellings and things like that, kind of like test pressing for vinyl.

Which song makes you run on the dancefloor?
Anything by The Sonics makes me a foot-loose man.

The world’s best live club?
Hard to answer this one, the one place I will always remember was one in Stuttgart, Dei Rhore? Not sure how it was spelled but it is a tunnel, built into a mountain. Played there in Nebula with Unida and somebody stole my belt buckle. While I was in the shower.

Why are your concerts the best ones?
The spontaneous combustion that happens at our shows, the crazy light shows and the unknowing state of Isaiah and Andy.

If your music was food, what would it taste like?
Basil, mozzarella de bufalo and tomatoes. Capprice.

Are the Beatles overrated?
I always was kind of a stones guy myself.

Your greatest mental defect?
Isaiah, but Luke our light guy comes in a close second.

Which question do you absolutely want to be asked?
Can I buy 10 of those?

Sometime in the 80s the rest of Motörhead gave Lemmy an ultimatum, that he had to take a shower, otherwise they wouldn’t let him on the bus. How’s the olfactory situation when you’re on tour?
Brush your teeth, you breath smells like a horses’s ass!!! I’m not saying who but it isn’t me!! You see, you can’t really give an ultimatum to anyone when you don’t know who to give it to. It’s funny how everybody denies it when the fact is that someone just cut some serious ass!!