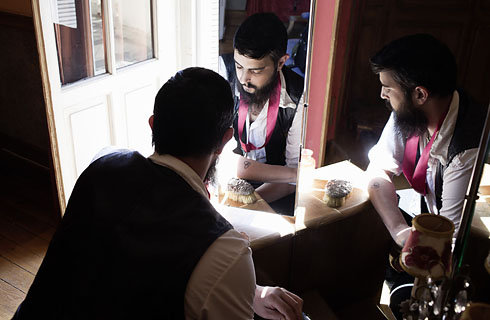 What was the most wonderful gig you ever played?
There have been many highlights, but I think one that shines through was playing the Montreux Jazz Festival. Not only is it so historical, but we had the privilege of opening for Antony and the Johnson’s.

Where would you absolutely love to play?
Carnegie Hall of course.

Please describe your worst studio experience.
We had arranged some vocalists through someone else to come and sing on a track without hearing them first. They arrived and it was as if they had not sung before ever. I was in fetal position the whole time.

What would your music sound like if Elvis had never existed?
I would have made „Are you lonesome tonight“ famous instead.

The title of the book that touched you most is…
„Love in the time of cholera“.

Which ringtone do you use?
The crickets sound on the iPhone. Reminds me of my childhood summers in Australia.

The most beautiful love song ever is called…
„Black is the color of my true loves hair“.

Which song (except your own songs) do you know by heart?
Any Smiths / Morrissey song.

Which Beatles song deserves a decent cover (by you)?
I already did one with my father. We did „In my life“.

Which TV show is essential?
„Hoarders“. It reminds me that I am actually more sane than I thought.

Please tell us your favourite joke.
That hell actually exists. It’s totally a joke and hilarious.

Describe the perfect stage outfit.
Anything from Star Styling from Berlin.

What would you be today if you had not become a pop star?
Well first off I am not a pop star at all but I would be just depressed if I couldn’t make music. Is that an occupation? I would be a professional if it were.

In which band would you like to play (except your own)?
Rodirigo Leão.

What’s your favourite instrument?
By far it is the cello though I can’t play it.

The most beautiful woman in showbusiness?
Antony Hegarty.