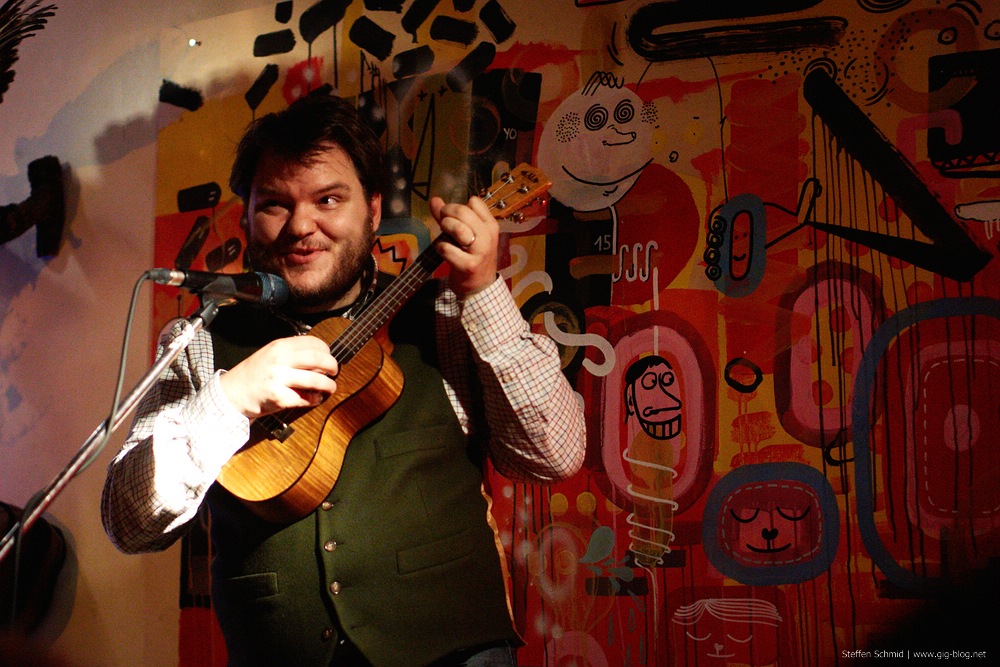 What was the most wonderful gig you ever played?
This is hard!!! I’ve played so many lovely and amazing gigs in my life! They have all been unique and so many places been just amazing. My second concert in Café Galao in Stuttgart ranks up there in the top 5. I once played at the Buddha bar in Byron Bay, Australia, there were bats shitting on the corrugated iron roof of the stage, making a beautiful rhythm.

Where would you absolutely love to play?
So many places! I’d love to play old mansions or castles or a nice low key festival. Or the living rooms of good friends.

Please describe your worst studio experience.
When my old band was recording our second album, they spent months perfecting the sound for the drums and the guitar and some weird extra sounds, that actually sounded awesome. But when it came to recording the singing, we were really pressed for time, because the record had been announced, so I had to record all the vocals in one day and I was sick. Worst day of my life. I was so pissed off at them for that. But I love them still.

What would your music sound like if Elvis had never existed?
Probably the same :D Maybe a little more cool due to a lack of reference points. :D

The title of the book that touched you most is…
100 years of solitude by Gabriel Garcia Marquez, who died just a couple of weeks ago. He was a master.
Also: Momo by Michael Ende. What an amazing book.
Oh wie schön ist Panama by Janosch is also a wonderful children’s book.
Come on! I love all kinds of books :D

Which ringtone do you use?
Standard Iphone ringtone. Sorry… I’m just that predictable…

Which song (except your own songs) do you know by heart?
Too many… But my favorite is True love will find you in the end by Daniel Johnston.

Which Beatles song deserves a decent cover (by you)?
I have covered Across the Universe pretty decently :D I like that song a lot.

Which TV show is essential?
Anything with zombies, post-apocalyptic stuff or swords… Preferably all together. :D

Please tell us your favourite joke.
This one is a favorite right now… „Why are ze German Puns not funny? Because zey are the Würst!“

Your favourite candy?
I’d have to say Icelandic liquorice with marsipan.

What would you be today if you had not become a pop star?
Pop star indeed?!? I’d probably be working as a social capital consultant or a fisherman or something.

In which band would you like to play (except your own)?
Wow!!! I’d absolutely love to be part of Interpol, Arcade fire or Beck’s backing band. Wow! I’d so love to play with so many bands. The most relaxing stage experience of my life was when I was asked to substitute a bass player for a friend’s band. I didn’t have to front anything, just hang back and be cool with the Drummer :D Best night of my life!

What’s your favourite instrument?
Whatever instrument I’m playing with at the time.

The greatest musical genius (dead or alive)?
I’m sorry I can’t think of anything more cool than Ludwig Van Beethoven. That man touches me in ways I can’t explain.

The most beautiful woman in showbusiness?
If by beauty you mean a combination of charm, love, talent, wisdom and grace coupled with sheer physical form. I would have to say Annie Lennox. I adore her.

How would you spend an unexpected gift of 1000 Euro (you’re not allowed to invest in alcohol, cigarettes, drugs, holidays or prostitution)?
Such money is not mine to use, so I’d probably give the money to the Icelandic Goat preservation society, a charity that I work for. But if the goats were safe and not in trouble anymore, I’d probably use the money to fund a tour of Australia and New Zealand with stops in Hong Kong and Singapore, as I’ve really been neglecting my fans there.