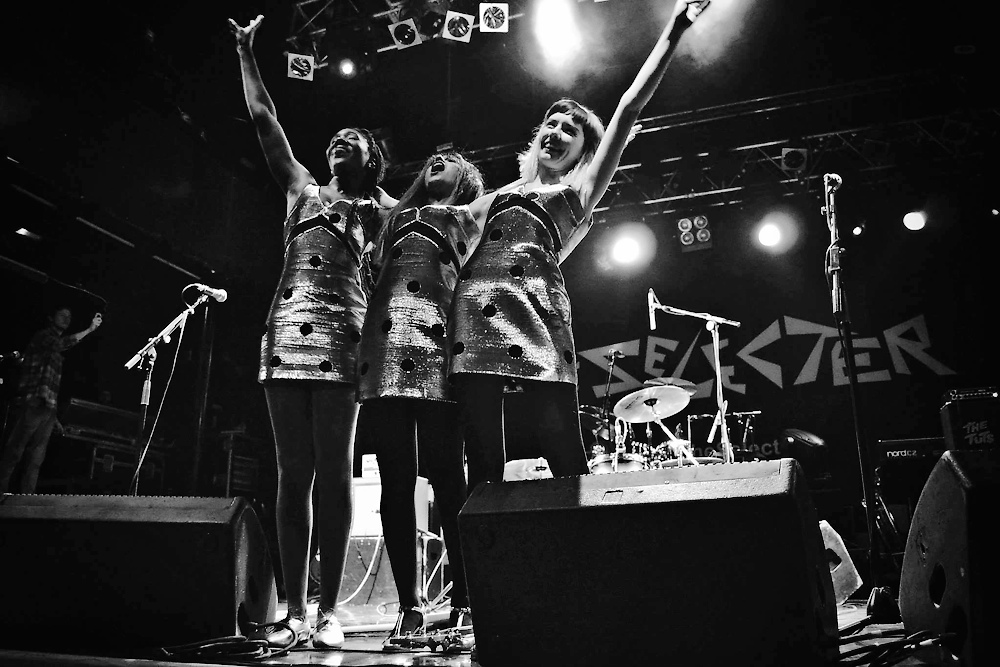 What was the most wonderful gig you ever played?
Beverley: London show we played recently. In Deptford. It was in a basement, it was sweaty, it was raw, it was packed. The support bands were amazing. The head of London (Laura Coles) was the promoter. Couldn’t ask for more. Your mates and fans are all there together.
Nadia: Yeah also, one of our headline gigs at The Garage in London. The one Harriet organised, loads of people singing the songs, sold out. The Selecter ones were all amazing, supporting The Undertones was great too. But sometimes smaller gigs are just as good as well.
Harriet: Yeah if we’re talking a tour, definitely The Selecter. As for single shows I really enjoy the ones I put on as ‘Dovetown’. Even though its really tiring playing and being the promoter it means I have full control over tickets, paying bands really fairly, the DJ set and the general vibe of the room, making sure it’s a positive, safe, all inclusive space which means everyone goes away feeling good!

Where would you absolutely love to play?
N: Coachella
B: Oh yeah, I wanna be with those wankers too!
N: Japan. Reading festival main stage.
H: Yeah, bigger festivals as well as all the cool small ones. LA would be great to play too.

Please describe your worst studio experience.
N: Current. Haha.
B: Currently recording now, it’s a frustrating experience trying to get the right sound.
N: Still having a good time though.
H: Nothing stands out as worst. We used to record at home a lot and now we’re trying out different producers. We’re still looking for our producer soul mate, someone who can nail our sound and capture the live energy in a track.

What would your music sound like if Elvis had never existed?
B: It would sound exactly the same. I do like Elvis… just not massively. Still sound the same cos Elvis ripped off black people anyway haha.

The title of the book that touched you most is…
N: Wuthering Heights. Viv Albertine’s ‘Music Clothes Boys’
B: Gone Girl. Hunger Games – the third one specifically.
H: Margaret Atwood- a Handmaid’s Tale, Amy Poehler’s ‘Yes Please’. The Hunger Games trilogy. I like the book I’m reading at the moment too ‘We are completely beside ourselves’.

The most beautiful love song ever is called…
H: Two Princes, Spin Doctors. Or ‘Baby when you’re gone’. Mel C and Brian Adams.
N: Yeah
B: This is for lovers
N: What a waster

Which song (except your own songs) do you know by heart?
N: Most Libertines songs, all Colour Me Wednesday, Spice Girls, 90s pop.
B: CMW too, Waxahatchee, Swearin. More recently, Happy Accidents.
H: The whole of Juliana Hatfield’s ‘Become what you are’ and ‘Only Everything’. Most Destiny’s Child singles. Nelly Furtado’s first album.

What would you be today if you had not become a pop star?
B: Shitting bricks.
N: Probably be working in fashion. Or I’d be a teacher.
H: I really don’t know. I love animals so I’d really want to work with them. Or probably as a famous person’s personal assistant as I’d be just too good at that. Or maybe a yoga teacher like my mum.

In which band would you like to play (except your own)?
N: Don’t want to!
B: None of them have the bants!
H: I also play in a band called Colour Me Wednesday right now.

What’s your favourite instrument?
N: The trumpet.
B: Sax is pretty cool.
H: Spooky piano like from a horror film.

The greatest musical genius (dead or alive)?
N: Pete Doherty
B: Michael Jackson? Pretty epic.
H: Tough question… I’ll get back to you.

The most beautiful woman/man in show business?
B: They’re all quite ugly inside.
N: Billy Bragg’s Wife Juliet
B: Yeah she lights up a room!
H: The famous cat, Lil Bub.

How would you spend an unexpected gift of 1000 Euro (you’re not allowed to invest in alcohol, cigarettes, drugs, holidays or prostitution)?
N: I was about to say pay a hoe and smoke some weed!
B: Studio time
H: Can’t do a lot with 1000 Euro so I’ll accept it as a donation to my life expenses. Cover my phone bill, rent and food shopping for a little while. And buy a freezer. I don’t have one and all my food is going mouldy!
N: Zip line across Amsterdam