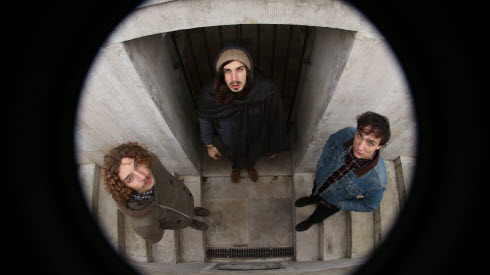 What was the most wonderful gig you ever played?
So far i think in Binic Festival 2014 in France. We played in front of about 3k amazing and excited people.

Where would you absolutely love to play?
I’d love to play in some big festivals like Lollapalooza.

Please describe your worst studio experience.
In London, with the first drummer of Go!Zilla while we were still a duo, we record in this shitty studio I can’t remember the name…those guys were just not working in the proper way, no mixing anything, no reverb, anything… We never received those tracks neither…

What would your music sound like if Elvis had never existed?
Probably the same! Elvis was great, but he was not singing his own songs, so probably someone else would have replaced him.

The title of the book that touched you most is…
When I discovered „Odissey“ at about 10 year old between my moms books, I thought that was the best I ve ever seen in my life. I still think that.

Which ringtone do you use?
The normal iPhone one.

The most beautiful love song ever is called…
Italian pop singers are writing just love songs with the same lyrics all the time, we should ask them!

Which song (except your own songs) do you know by heart?
I have a lot of Beatles songs into my heart, not a specific one.

Boxer shorts or briefs?
Boxer but that’s not interesting I think! Ahaha!

Which Beatles song deserves a decent cover (by you)?
We played for a few times „Tomorrow never knows“ with Fabio then we just drop, too many people covering Beatles, it’s hard to make an original cover with them.

Which TV show is essential?
Letterman was one of those.

Please tell us your favourite joke.
Farting and coughing at the same time.

Describe the perfect stage outfit.
I don’t have one but we always looks classy on it! I generally wear black shoes and pants and some other bands tee or either some random shirt that I like.

Your favourite candy?
I love all the sweets without exclusions.

What would you be today if you had not become a pop star?
I d love to be a Pop star, as I m not I can tell how Is my life now: satisfying, we enjoy our time playing and making a living out of it. If I haven’t played I probably would have just worked on music business in some other way, that’s also what I want to do after the end of the band.

In which band would you like to play (except your own)?
I would have played bass in Hendrix experience!
Or maybe second guitar with Ty Segall.

The greatest musical genius (dead or alive)?
Hendrix with no doubts.

The most beautiful woman/man in showbusiness?
Maybe Cameron Diaz!

How would you spend an unexpected gift of 1000 Euro (you’re not allowed to invest in alcohol, cigarettes, drugs, holidays or prostitution)?
1000 Euro Are not much money. I think I would take a flight to MEXICO or Peru anyway ;)