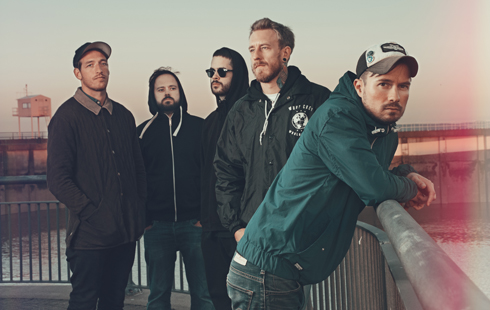 1. What was the most wonderful gig you ever played?
Hard to say as there have been a few over the years. One that sticks in my mind is when we headlined The Astoria (RIP) in London when our first record came out. Hearing 2,000 people singing the middle eight of Juneau was incredibly powerful.

2. Where would you absolutely love to play?
Recently I’ve been saying about how much I’d love to play Iceland. We’ve never done it as a band and I know I’d love it not just for a show but to spend some time there.

3. Please describe your worst studio experience.
Probably recording vocals for our first record, it was pressured. We ran out of studio time so we spent 10 days doing vocals while mixing from 10am to 2am everyday. Exhausting.

4. What would your music sound like if Elvis had never existed?
Wow, hard to say but probably not as groove ridden that’s for sure.

5. The title of the book that touched you most is…
Snow Angels by Stewart O’Nan. My friend Wauz recommended it to me years ago and it reminds me of him a lot.

6. Which ringtone do you use?
The standard one.

7. The most beautiful love song ever is called…
War Ensemble by Slayer.

8. Which song (except your own songs) do you know by heart?
Most of the Blue album by Weezer.

10. Which Beatles song deserves a decent cover (by you)?
Nowhere man, still my favourite from when I was a kid.

11. Which TV show is essential?
Twin Peaks without a doubt.

13. Describe the perfect stage outfit.
T-shirt, jeans (or shorts) and some Saucony’s

15. What would you be today if you had not become a musician?
Probably working in a record store. That is my dream job that I actually had before Funeral became successful.

16. In which band would you like to play (except your own)?
I would have loved to have played in Samiam or Avail…both those bands blow my mind still.

19. The most beautiful woman in showbusiness?
Damn…Gillian Anderson 100%

20. How would you spend an unexpected gift of 1000 Euro (you’re not allowed to invest in alcohol, cigarettes, drugs, holidays or prostitution)?
I probably donate it to an animal shelter to help neuter and feed stray cats and dogs.