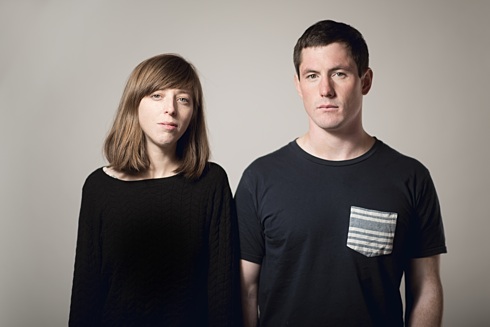 What was the most wonderful gig you ever played?
At the beginning of this tour we joined Agnes Obel on tour around Europe, every night we were over the moon to be playing in old beautiful venues and the audiences were always silent and listening to us – it was so great! I think our favourite one was in Lausanne, Switzerland but we also loved playing at All Saints Church in Brighton in the UK.

Where would you absolutely love to play?
I’ve heard the Union Chapel in London is really nice. I also would like to visit more little towns, and play house concerts, because these are often very special shows!

Please describe your worst studio experience.
We haven’t had many of those fortunately! We don’t often record in studios – only occasionally, more often we record in different spaces, laundries, bedrooms, schools, halls…

What would your music sound like if Elvis had never existed?
Probably very much the same, we don’t have much Elvis swagger in our music!

The title of the book that touched you most is…
I don’t really know, I was quite effected by 1984 I think, John really loves ‚On the Road‘ by Jack Karouac.

Which ringtone do you use?
Neither of us actually have a phone. They both stopped working, and we never bothered to replace them. It’s quite nice.

The most beautiful love song ever is called…
That’s a tough one, I think „Hey, that’s no way to Say Goodbye“ by Leonard Cohen is really lovely – but it’s not exactly beautiful…

Which song (except your own songs) do you know by heart?
Probably all the words to every Spice Girls song ever written – I memorized them when I was about 8 years old, and I will never forget them.

Which Beatles song deserves a decent cover (by you)?
John used to be obsessed with the Beatles – he said we would cover I’m Only Sleeping.

Which TV show is essential?
We don’t watch TV very much.

Please tell us your favourite joke.
Our friend Fraser tells us the best joke is ‚The Bear and the Rabbit‘ from Eddie Murphy’s Delirious. (He just told it to us, it was quite funny).

Describe the perfect stage outfit.
I think we would all wear navy blue.

Your favourite candy?
Not really into lollies. I like salty things.

What would you be today if you had not become a pop star?
Thankfully we are not exactly pop stars, we are just small glowering beginnings of star dust in another realm a little but farther afield than pop music.

In which band would you like to play (except your own)?
No clue. I like my band.

What’s your favourite instrument?
The piano, then the cello, and the harp. I always wanted to play the harp!

The greatest musical genius (dead or alive)?
I really like Rachmaninoff. What a talented chap (who must also have had enormous hands).

The most beautiful woman in show business?
Patty Smith – she has a lot of soul in her face.

How would you spend an unexpected gift of 1000 Euro (you’re not allowed to invest in alcohol, cigarettes, drugs, holidays or prostitution)?
We would probably spend it all on musical instruments, that would be nice. We might also buy a bunch of flowers.