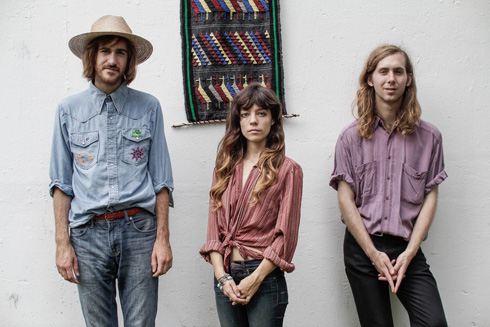 What was the most wonderful gig you ever played?
Anna Rochinski: We’ve had lots of great shows over the years. I find the best ones happen when you least expect it. For instance, we had a great gig in San Diego the other night, having taken 2 weeks off and jumping back into it with our fingers crossed was actually really great and we played quite well.
John Andrews: One time we played a wedding at an antique car museum in the woods of New Hampshire. That was rad.

Where would you absolutely love to play?
A.R.: I’d really like to play in Australia! Hopefully we’ll get invited soon!
J.A.: I would love to play Budapest Hungary. That’s where my family is from.

Please describe your worst studio experience.
A.R.: I don’t really think I’ve ever had an experience in the studio that was incredibly horrible. It can get dodgy when everyone has a ton of conflicting opinions and nothing gets resolved, but when good work comes out of those moments it’s worth it.
J.A.: We were recording once during hurricane sandy and the power went out, but then we just got drunk and played madlibs.

What would your music sound like if Elvis had never existed?
A.R.: We’d probably still be doing hymnals, in matching gingham dresses every sunday in the sears parking lot.
J.A.: Elvis died on my birthday.

The title of the book that touched you most is…
A.R.: There are way too many! „The Wind Up Bird Chronicle“ I read this winter on tour and that was amazing. I just tore through it. I’d read it again.
J.A.: I really like „The Little Prince“.

Which ringtone do you use?
A.R.: The default iphone ringtone that everyone else has. It gets awkward in the supermarket line when someone’s phone rings.
J.A.: I don’t have a cellphone right now. It’s awesome.

The most beautiful love song ever is called…
A.R.: Too many good love songs to name. I listened to a great one by Paul Mccartney & Wings called „Let Me Roll It“ that is pretty amazing.
J.A.: „Museum Of Love“ by Daniel Johnston

Which song (except your own songs) do you know by heart?
A.R.: I know tons of songs by heart. I know whole albums by heart. I could probably sing all of Fiona Apple’s „Tidal“ by heart.
J.A.: „Big Bad John“ by Jimmy Dean.

Boxer shorts or briefs?
A.R.: Briefs all the way! Or boxer briefs. Guys who wear boxers kind of remind me of 12 year old boys sometimes. But if you can rock it, go for it.
J.A.: I wear boxers. Anna can shut up.

Which Beatles song deserves a decent cover (by you)?
A.R.: I learned how to play „Fixing A Hole“ recently. We could probably pull it off, I think.
J.A.: „Her Majesty“.

Please tell us your favourite joke.
A.R.: What did the hippie say when asked to leave the yoga class? „Namaste“ (you have to say it out loud. Also I learned that from John).

Describe the perfect stage outfit.
A.R.: Something that looks cool but doesnt restrict your breathing too much and that is OK to spill beer on. Or something really pleasant and classy , like how doo wop bands used to dress. On the other hand, they have the jeans in the rock n roll hall of fame that the dude from Alice In Chains wore, all ripped and covered in shitty tape, so there’s something to be said for just wearing whatever you feel like.
J.A.: Whatever I can find in my suitcase that doesn’t smell too bad.

What would you be today if you had not become a pop star?
A.R.: I’m not sure, that’s something I will never know.
J.A.: I’m a pop star?

In which band would you like to play (except your own)?
A.R.: I’d be in Heart just so I can play „Magic „Man“ with them. Maybe they’d let me do the sweet acoustic intro. If not, I’d still be down. Also, the Traveling Wilburys.
J.A.: If I could play drums in „Blink 182“. My 11 year old self would pat me on the back.

What’s your favourite instrument?
A.R.: I really love the flute, and harp. Two things I wish I could play.
J.A.: Piano.

The greatest musical genius (dead or alive)?
A.R.: I’m not sure, but listen to „Peace Piece“ by Bill Evans.
J.A.: Biff Rose.

How would you spend an unexpected gift of 1000 Euro (you’re not allowed to invest in alcohol, cigarettes, drugs, holidays or prostitution)?
A.R.: 1000 Euro… Hmm. If I had room, I’d invest in materials to build a nice garden. Get new contact lenses because I’m on my last pair right now. Maybe put some away to save for later. Then I’d help Keven (my boyfriend) fix up his motorcycle so we can go cruisin‘ whenever we feel like it.
J.A.: I’d buy a dinky car