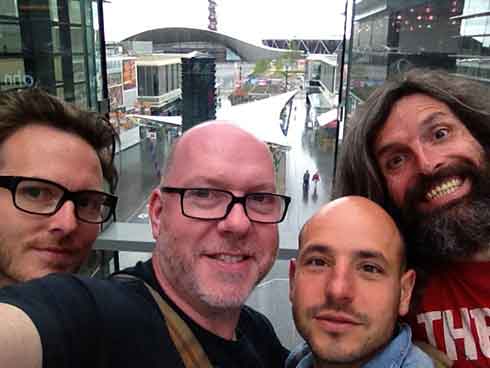 What was the most wonderful gig you ever played?
We once played a gig on the London Eye! We had a pod to ourselves and played above our home city of London, amazing!

Where would you absolutely love to play?
Ibiza Rocks would be fun we think, also Japan!

Please describe your worst studio experience.
When Olly was recording a song called Chim Chim Cheree he was in a vocal booth with no fresh air all day and he lost his voice and felt really bad, but then like a magic trick it came back just in time for the final take.

What would your music sound like if Elvis had never existed?
Exactly the same but with much worse outfits!

The title of the book that touched you most is…
Water ship down.

Which ringtone do you use?
Church bells

The most beautiful love song ever is called…
A case of you by Joni Mitchell.

Which song (except your own songs) do you know by heart?
Happy Birthday

Boxer shorts or briefs?
Boxers but Rob our drummer once sleep walked around an Italian hotel in his briefs surrounded by super models who were at a party in the same hotel.

Which Beatles song deserves a decent cover (by you)?
Norwegian Wood.

Please tell us your favourite joke.
Two dyslexics walk into a kitchen, one says „can you smell gas?“ The other replies „smell Gas? I can’t even smell my own name!“

Your favourite candy?
Peanut butter and chocolate, the perfect storm!

What would you be today if you had not become a pop star?
Retired and much richer probably.

In which band would you like to play (except your own)?
AC/DC.

The greatest musical genius (dead or alive)?
They’ve not been born yet!

The most beautiful woman in showbusiness?
Kelly Le Brock in the film „weird science“.

How would you spend an unexpected gift of 1000 Euro (you’re not allowed to invest in alcohol, cigarettes, drugs, holidays or prostitution)?
We’d buy all our friends flights to see us play in wonderful Stuttgart!