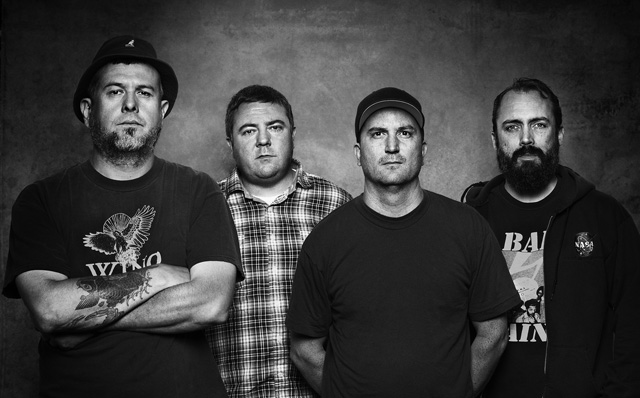 1.What was the most wonderful gig you ever played?
Every gig is wonderful and each one is as important as the next. Having said that I we just played St Andrews Hall in Detroit Michigan. Detroit has been very good to us over the years. It was very nice to play this historic venue again.

3. Please describe your worst studio experience.
While tracking our first full length album Transnational Speedway League I played to a click track. That was 20 years ago and I was not ready for that challenge. It was a very frustrating experience. I am pleased to say I have practiced a few times since then and have improved in this department.

4. What would your music sound like if Elvis had never existed?
I don’t think Clutch’s music would have changed all that much. As much as I appreciate Elvis’s contributions to Rock n Roll, I think what he did was a watered down version of the music that Fats Domino, Professor Longhair and Little Richard were doing at the same time. I listen to those artists on a regular basis. I can’t say that of Elvis’s catalog.

5. The title of the book that touched you most is…
Cormac McCarthy’s „Blood Meridian“.

6. Which ringtone do you use?
The one that sounds like the ship is going down. It’s the only one I can hear anymore!

7. The most beautiful love song ever is called…
John Coltrane’s „Naima“

8. Which song (except your own songs) do you know by heart?
I had to learn Tower of Power’s Don’t change horses in the middle of a stream for a blues gig last week.

9. Which Beatles song deserves a decent cover (by you)?
I bet we could pull off a good version of Come Together.

11. Which TV show is essential?
The HBO series „Boardwalk Empire“ is pretty great.

12. Please tell us your favourite joke.
I’m not good at that at all. I will not waste peoples time with a lame attempt.

15. What would you be today if you had not become a musician?
Maybe a chef. I love to cook and the crazy hours are very much like Rock N Roll.

16. In which band would you like to play (except your own)?
Black Sabbath

19. The most beautiful woman in showbusiness?
My wife, she does the books for both the band and our label.

20. How would you spend an unexpected gift of 1000 Euro (you’re not allowed to invest in alcohol, cigarettes, drugs, holidays or prostitution)?
I would go to ebay and buy another snare drum. Vintage Slingerland drums are a damn addiction for me these days!