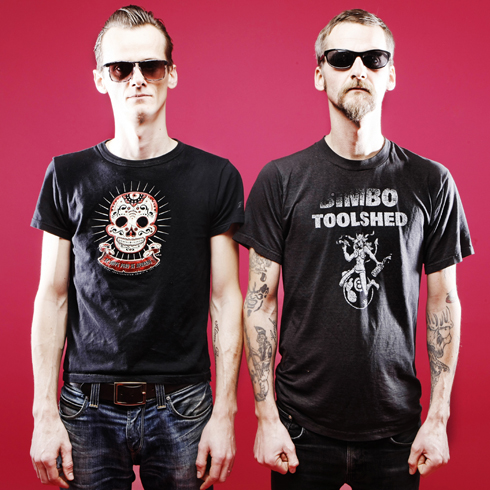 1. What was the most wonderful gig you ever played?
This is very difficult to answer – most gigs are good in one way or another. You might be playing really well and tight or the crowd is into it like hell – different parameters shape a good show and picking one out is not easy but one in valence, on the recent french tour was a Top 5 Favorite!

2. Where would you absolutely love to play?
Again, this is tricky! I have no favorite festival or venue… I’ve played anywhere, everywhere and the only thing that matters si the crowd and the energy. You can play for 2000 and it’s a drag and you can play for 25 in a bar and have the best show ever. But I’d like to play at the Hardly Strictly Bluegrass Festival again.

3. Please describe your worst studio experience.
The recording of Egg – this was in a studio that is no more. We had to chase down an old ghost of a really crappy danish band before we could even get a remotely good sound.

4. What would your music sound like if Elvis had never existed?
Not really sure…different in some form probably but I’m not really inspired by Elvis. If you asked the same question with Carl Perkins, James Brown, Eddie Cochran or even Hank Williams I think the asnwer might be interesting but Elvis was in my opinion, a pop phenomenon at the right spot at the right time. R’n’R, Blues, Rockabilly was dangerous but Elvis softened it up, I think. But had he not walked the planet, there might have been a slighter difference to the Rpck’n’Roll evolution.

5. The title of the book that touched you most is…
Hank Williams biography.

6. Which ringtone do you use?
Standard.

7. The most beautiful love song ever is called…
You Fucked Up – by Ween.

8. Which song (except your own songs) do you know by heart?
None – I’m bad at remembering words.

10. Which Beatles song deserves a decent cover (by you)?
Ahhhhhh…Don’t know! I’m not well wandered in Beatles material but I have heard enough crappy versions of so many of their songs that I would leave it alone. The world doesn’t need anymore covers. The Beatles I know didn’t turn out better in a conversion.

13. Describe the perfect stage outfit.
Whatever makes you look good, sharp and ready for the job! I never fancied costumes or designer clothes!

15. What would you be today if you had not become a musician?
I would be a famous racing driver!

16. In which band would you like to play (except your own)?
I wood hate seeing myself taking someone else’s place in a band that I love. So no-one, except maybe for Heavy Trash in which I play bass, but isn’t my band. I like hanging out with Matt and Jon and the band and the crew.

20. How would you spend an unexpected gift of 1000 Euro (you’re not allowed to invest in alcohol, cigarettes, drugs, holidays or prostitution)?
I would spend the 1000 shiny euros on a trip to Hvide Sande (little ocean town on the danish west-coast) with my kids, Henry and Alma, my girlfriend Ida Marie, my brothers and their loved ones, the band and my best friends. I would invite them all to eat at „Røgeriet“ (speciality traditional smoked fish). The buffet that would be…