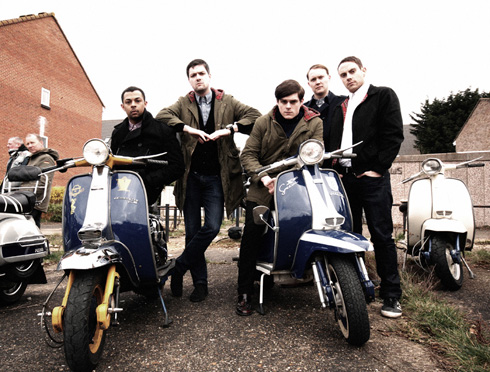 What was the most wonderful gig you ever played?
We’ve played so many places over the past 5 years it’s impossible to pick one definitive favourite. But there are a select few that have stood out for us. Wembley was a great experience, KoKo in Camden was a lot of fun, also playing to 10,000 people in Norwich supporting Madness was a big gig for us. Also you find sometimes some smaller venues can produce some memorable gigs. We just love playing anywhere.

Where would you absolutely love to play?
In all honesty I don’t really know… I guess at the top of Everest would be cool, but pretty cold. Or on the moon would be alright I guess.

Please describe your worst studio experience.
When we came to recording Generation Silenced it was pretty frustrating. All of the drums, guitars, pianos, everything was recorded, all there was left was me. Then when it came to a couple of days before I was about to start recording I came down with Tonsillitis. Just my luck. After I got over that it was all go.

What would your music sound like if Elvis had never existed?
Probably the same. I don’t really give a shit about that fat yankee quiffy prick.

The title of the book that touched you most is…
Although I haven’t read it yet, my own Biography will touch me the most I think. I reckon I’ll be able to relate to it the most.

Which ringtone do you use?
Pretty big standard iPhone classic phone.

The most beautiful love song ever is called…
The song that really touches me as a listener is a song that truly speaks from the heart and is a completely honest, all cards on the table love song. That song is the Thong Song by Sisqo.

Which song (except your own songs) do you know by heart?
There are quite a few. A lot of Beatles songs I know inside out, Lately by Stevie Wonder, Bon Iver’s version of I Can’t Make You Love Me is wedged in there, the list could go on for hours!

Which Beatles song deserves a decent cover (by you)?
Ah I could lose myself in playing Beatles songs all day, there are loads that I’d like to cover, but one that I think could be really fun would be Helter Skelter.

Which TV show is essential?
Spooks is a personal favourite, British MI5 spies is always good fun. Strike Back for Special Ops, explosions and tits, and Family Guy for humour.

Please tell us your favourite joke.
Nun goes onto a bus that has no passengers. Nun to bus driver: I’m dying and I want to have sex before I die but I must remain a virgin so it must be anal and I cant commit adultery so the man must be single, can you fulfil my wish? Yes says the driver and shags her up the arse. Then feeling guilty the driver says “ I’m sorry I lied I’m married with 3 kids“ “ That’s ok“ said the nun “ I lied too. My name’s Dave and I’m going to a fancy dress party!

Describe the perfect stage outfit.
Whatever I decide to wear on the day really…

What would you be today if you had not become a musician?
Dead inside

In which band would you like to play (except your own)?
I would see playing with anyone else not only treacherous but not as fun.

The greatest musical genius (dead or alive)?
Well there are a few people that I look to as pioneers. The Beatles, Stevie Wonder and Justin Bieber

How would you spend an unexpected gift of 1000 Euro (you’re not allowed to invest in alcohol, cigarettes, drugs, holidays or prostitution)?
Hmmm good question. What else do you need? Maybe some new clobber.

You are playing quite large sold-out venues in the UK. In Germany you will find yourself in small clubs. Pain or pleasure?
As I said we love playing anywhere, and everyone’s going to get the same show in whatever venue we play. They’re still going to get 100% Missing Andy in their faces, when we get on any stage we just love doing our thing.

Is there yet another mod revival in England? And: are you a part of it?
I think there are certain elements of the mod culture/fashion being integrated into today, but I wouldn’t call it a revival, but with our style there are definitely features we’ve nicked.

What do you know about Stuttgart?
Absolutely nothing, so I’m coming into it with an open mind and looking forward to what it has to offer!