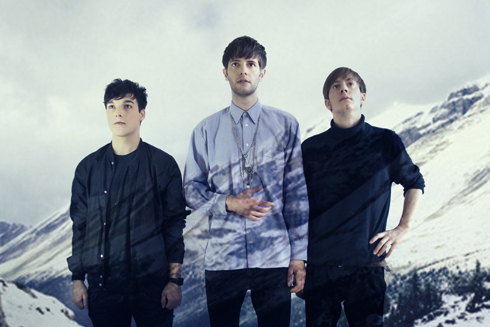 What was the most wonderful gig you ever played?
Our favourite performance until now was at Dockville Festival in Hamburg. The tent we played in was packed and people were spilling out of it, and we thought: “Yes, this is how it should be.”

Where would you absolutely love to play?
We would love to play anywhere and everywhere on the planet; one of the best things about playing music is where it takes you around the world.

Please describe your worst studio experience.
Simon (guitar) produces all of our music, so we actually always have a good experience in the studio.

The title of the book that touched you most is…
It’s a battle between Wuthering Heights and The Picture Of Dorian Gray.

Which ringtone do you use?
Never use your favourite song as a ringtone, because you’ll hate it very quickly. My alarm tone is “My House” by Hercules And Love Affair, because it goes “Whoop, get up, get up!” at the beginning. Classic.

The most beautiful love song ever is called…
Well there’s a lot of different sides to love. The love songs would be “I Want You” by Bob Dylan for the infatuation part, “Friday, I’m In Love” by The Cure for the euphoric part, “There Is A Light Which Never Goes Out” by The Smiths for the eternal part, and “Wolves” by us for when it all falls apart.

Which song (except your own songs) do you know by heart?
Every so often we burst into a beautiful version of “Stay” by Hurts. Wouldn’t say it sounds exactly like the original, but close.

Boxer shorts or briefs?
We’re all about the American Apparel boxers. We may be dark on the outside but our underwear is pink, blue and green.

Which TV show is essential?
We don’t watch TV.

Please tell us your favourite joke.
One you can print, yeah? How many surrealists does it take to change a lightbulb? Fish.

Your favourite candy?
Favourite sweets are Love Hearts. They’re those English sweets with cute and kitschy messages on them like: “Yours Forever”, “Blue Eyed Boy” and “Fax Me”.

What would you be today if you had not become a musician?
Rich.

In which band would you like to play (except your own)?
We’d probably want to play in a horrible band like Nickelback so we can sabotage the music and never let them release an album again. Ever.

What’s your favourite instrument?
My Korg MS2000. It looks good, is ridiculously simple, yet I feel I could make any sound on it.

The most beautiful woman in showbusiness?
Karin Dreijer-Andersson.

How would you spend an unexpected gift of 1000 Euro (you’re not allowed to invest in alcohol, cigarettes, drugs, holidays or prostitution)?
Well we don’t invest in any of the above anyway. We’re the perfect band to bring to your parents. Word. We’d buy our new album, “Summer”, 80 times.

Have you ever been to Stuttgart? If yes: What was your impression?
Yes, the kids in Stuttgart want to dance. We are coming back on the 12th of November to play the Pop.NotPop Festival, so make sure you’re there with some white shoes to get dirty.