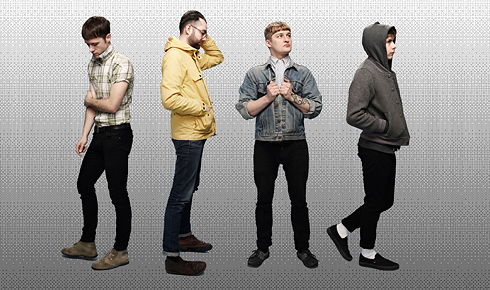 What was the most wonderful gig you ever played?
London’s Electric Ballroom. It’s the most amazing venue and was a very large crowd.

Where would you absolutely love to play?
Brixton Academy in London is definitely a dream.

Please describe your worst studio experience.
Ed getting told off like a school boy for not knowing what an inversion was!

What would your music sound like if Elvis had never existed?
The same but maybe dom and sam wouldn’t have started rolling up the sleeves on their t-shirts.

The title of the book that touched you most is…
The Outsider by Albert Camus.

Which ringtone do you use?
It’s called sci-fi and whenever I get a call I pretend there’s a UFO outside.

The most beautiful love song ever is called…
„Something Happened On The Way To Heaven“.

Which song (except your own songs) do you know by heart?
„Something Happened On The Way To Heaven“.

Which Beatles song deserves a decent cover (by you)?
I’d love to do „There’s a Place“.

Which TV show is essential?
The office.

Please tell us your favourite joke.
We usually like to laugh at each other. It would be considered bullying in most circles but we find a lot of pleasure in each others misery.

Describe the perfect stage outfit.
Dom has the perfect outfit. A very small pair of 80’s jogging shorts. A short sleeved pastel coloured stripy shirt and an Amish mans hat. That’s something the rest of us can only dream to achieve.

Your favourite candy?
I’m more is a crisp man… Pickled onion monster munch… I don’t know if you get them in Germany but they’re delicious!

What would you be today if you had not become a musician?
Depressed.

In which band would you like to play (except your own)?
The Walkmen.

What’s your favourite instrument?
I like the church organ… It always sounds very dramatic.

The most beautiful woman in showbusiness?
Jeniffer Aniston! or Selma Hayek!

How would you spend an unexpected gift of 1000 Euro (you’re not allowed to invest in alcohol, cigarettes, drugs, holidays or prostitution)?
Half of Ed’s wages go on prostitution each year. You’ve taken a lot of fun things out of the equation.

Have you ever been to Stuttgart? If yes: What was your impression?
We’ve not been. So far we’ve played Berlin, Hamburg and Koln. We can’t wait to come!!!