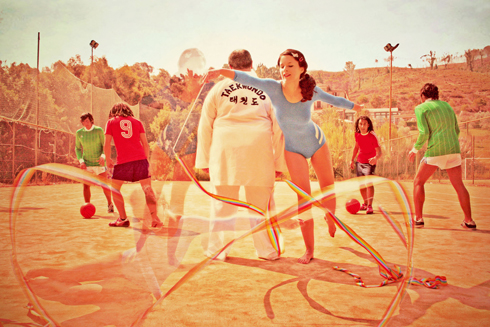 What was the most wonderful gig you ever played?
I think last year at South Pop Festival in Spain was pretty cool!!

Where would you absolutely love to play?
Primavera Sounds and Gods of Metal are our first choices ( not in this order ! )

What would your music sound like if Elvis had never existed?
I suppose we would be a Giuseppe Verdi’s cover band!!

Which ringtone do you use?
It’s called “Ringer Recon”..techno music !!!

The most beautiful love song ever is called…
Obviously…“The Perfect Love Song“ by Divine Comedy!!!

Which song (except your own songs) do you know by heart?
The complete Queen’s songbook!!

Which Beatles song deserves a decent cover (by you)?
I hate covers!!!

Which TV show is essential?
“Flight of the Conchords“

Please tell us your favourite joke.
I love jokes but each I can’t even remember one!!! Sorry!!!

Describe the perfect stage outfit.
A stage outfit has to be connected with the music you’re playing, I think every good band will find its perfect outfit naturally !!

Your favourite candy?
I don’t like much sweets, I prefer Bretzels!!!!

What would you be today if you had not become a pop star?
Pop Star who??? :D Anyway, the only thing I’m good at it’s music. I really can’t do anything else!! If forced, I would have liked to be a psychologist, I like to listen to people’s issues!

In which band would you like to play (except your own)?
SUPER FURRY ANIMALS!!!!

The greatest musical genius (dead or alive)?
The question of the questions : Brian Wilson or Burt Bacharach??

How would you spend an unexpected gift of 1000 Euro (you’re not allowed to invest in alcohol, cigarettes, drugs, holidays or prostitution)?
This one is too easy : GUITARS!!!

We can’t wait to learn more about your upcoming album “Cosmos”. What can we expect?
“Cosmos” is just the ideal follow up to “Personal Train”. Has much in common with our first record, but this one was very much inspired from the 70’s, in the same way the first one was inspired from the 60’s.
It still has that “Italian” feeling on it, but has the same melodic taste of “Personal Train”… I think it will be fun for who liked the first one!!!