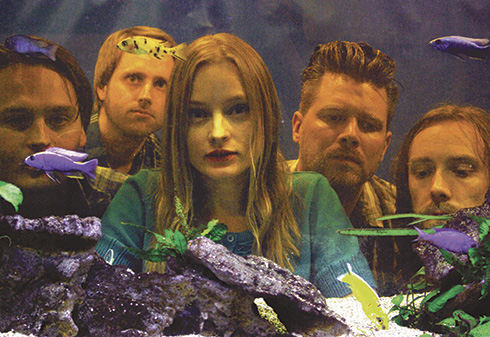 What was the most wonderful gig you ever played?
Martin: I think that would be our first gig in London, at the Half Moon.
Alex: Yes, I agree. We’ve done lots of cool opening shows for bigger bands, but even though the night at the Half Moon was the first time in the UK, the crowd and the band felt like a big family reunion.

Where would you absolutely love to play?
M: I don’t have a place like that, where i dream of playing.
A: Roskilde Festival in Denmark. That’s where I started learning about live music as a teenager.

Please describe your worst studio experience.
M: I really like it in the studio, so I can’t remember ever having a bad time there.
A: We love working in the studio. I own my own studio, so we’ve got plenty of time to do stuff there. But, I won’t forget when one of my favourite microphones suddenly died one day.

What would your music sound like if Elvis had never existed?
M: No idea at all.

The title of the book that touched you most is?
M: The Poetic Edda.
A: Still searching for it…

Which ringtone do you use?
M: Manic Monday.
A: A hysterical vibraphone jazz solo from the 60’s.

The most beautiful love song ever is called?
M: Wuthering Heights by Kate Bush.
A: Schubert Piano Trio No. 2 in E flat major, Op. 100.

Which song (except your own songs) do you know by heart?
M: There must be hundreds.
A: Wild Thing

Which Beatles song deserves a decent cover (by you)?
M: Helter Skelter.
A: Good choice Martin!

Which TV show is essential?
M: The morning news maybe.
A: VH1 Final Countdown if you like to learn about rock history in a simple way.

Please tell us your favourite joke.
M: I don’t think I know any jokes.
A: sorry…

Describe the perfect stage outfit.
M: Whatever’s comfortable.
A: Well, I have put on some really uncomfortable clothes sometimes just to look cool. I’m a vain person , but I think I have found a good balance now after all the years of playing music.

What would you be today if you had not become a pop star?
M: An archaeologist.
A: A mounted police. I like the idea of riding a horse everyday in the park, in the city, on the street, looking neat, helping tourists. Then, every six-months there’s a football hooligan fight somewhere to ward…. unfortunately.

In which band would you like to play (except your own)?
M: Kiss.
A: AC/DC or early Alice Cooper (the band, not the solo artist)

What’s your favourite instrument?
M: Guitar!
A: Drums, even though I play on strings also.

The most beautiful woman in showbusiness?
M: Pass.
A: i think Sigourney Weaver is the coolest female actress ever.

How would you spend an unexpected gift of 1000 Euro (you’re not allowed to invest in alcohol, cigarettes, drugs, holidays or prostitution)?
M: Candy.
A: A long dinner at an exclusive and expensive restaurant. I’ll pay for the wine and cognac myself.

Maybe you’ve been asked that a lot of times before, but how did you choose your name of the band?
M: It comes from a TV-show.