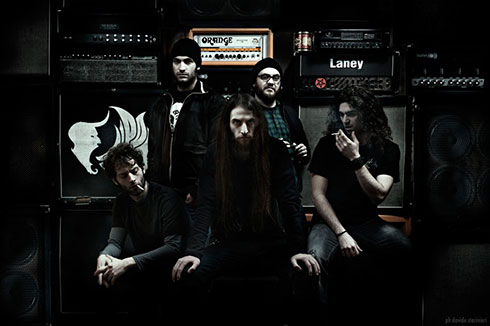 What was the most wonderful gig you ever played?
Can’t say it exactly. Many of them and for many different reasons. Probably Mi Odi Festival in Milan, on the main stage.

Where would you absolutely love to play?
What are you asking me? Roadburn, of course.

What would your music sound like if Elvis had never existed?
I really don’t know, if it was the same question with „Black Sabbath„, I would have had a clearer idea about the answer.

The title of the book that touched you most is …
„The Alchemist“ by Paulo Coelho.

Which ringtone do you use?
I use only vibration.

The most beautiful love song ever is called…
“Babe, I’m gonna leave you” by Led Zeppelin, because love is not just happiness.

Which song (except your own songs) do you know by heart?
„Wicked World“ by Black Sabbath.

Boxer shorts or briefs?
Briefs for me.

Which Beatles song deserves a decent cover (by you)?
„Yer Blues“.

Which TV show is essential?
None.

Please tell us your favourite joke.
Something with black humour.

Your favorite candy?
Something balsamic.

What would you be today if you had not become a pop star?
I’m not a pop star. Definitely not here by the way.

In which band would you like to play (except your own)?
Type O Negative.

The most beautiful woman in show business?
Dunno.

How would you spend an unexpected gift of 1000 Euro (you’re not allowed to invest in alcohol, cigarettes, drugs, holidays or prostitution)?
I would invest it in the band, for sure.

Italy witnessed a great phase of psychedelic rock around the 1970s. Zippo is actually playing Heavy Psyche (a term quite unknown in Germany). How would you describe your relation to Italian psychedelic rock and how does it affect your style of music?
We’re strongly connected to the 70’s italian progressive rock, there was a huge cauldron of amazing bands like Area, Pfm, Banco del Mutuo Soccorso, and the underground was even more prolific. I think it’s the golden age of Italian rock music and yes, it surealy affects our style in a way.