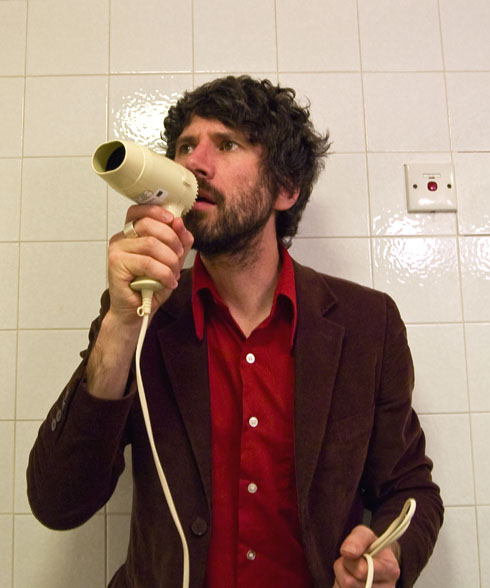 What was the most wonderful gig you ever played?
Super Furry Animals. A three hour set at the festival hall in London in 2004. We had all our films, stage sets and lots of extra musicians and friends.

Where would you absolutely love to play?
It’s always fun to play somewhere for the first time, so I look forward to playing in Schorndorf.

Please describe your worst studio experience.
Well, I guess you learn from bad experiences, mostly when I’m in a studio I just feel lucky to be there. Mistakes, tension and stress  have often played an important part in the making of great recordings.

What would your music sound like if Elvis had never existed?
Maybe a bit more like Eddie Cochran, or Buddy Holly, had he lived.

The title of the book that touched you most is…
At this moment Lanark by Alistair Grey.

Which ringtone do you use?
The song ‚Telephone Line‘ by ELO.

The most beautiful love song ever is called…
It’s called ‚You’ve Got Me There‘ by the band ‚Cardinal‘ from 1994.

Which song (except your own songs) do you know by heart?
I have a terrible memory, I think that’s why I write songs of my own!

Which Beatles song deserves a decent cover (by you)?
My favorite Beatles song is Happiness is a warm gun, but their records were recorded so well I would not want to replicate it!

Which TV show is essential?
I guess the weather if you’re a farmer or something!

Describe the perfect stage outfit.
Motorcycle helmets are very useful if you play badlly, and the audience starts throwing bottles at the stage.

What would you be today if you had not become a pop star?
I don’t consider myself a ‚popstar! In that, my music is not very popular and I don’t crave celebrity. However I’m lucky enough to make a living as a musician and songwriter,  I would still sing if I didnt make money out of it… I used to design and sell T shirts to get by when I was younger.

In which band would you like to play (except your own)?
Y Niwl, they are an instrumental surf band from Wales, and they are opening up my shows in Germany.

What’s your favourite instrument?
My guitar, it’s made of wood, plastic and Velcro!

The greatest musical genius (dead or alive)?
In a primitive way, John Fahey.

The most beautiful woman in showbusiness?
Patti Smith?

How would you spend an unexpected gift of 1000 Euro (you’re not allowed to invest in alcohol, cigarettes, drugs, holidays or prostitution)?
Paying debts and buying records.

Your song “Shark Ridden Waters” is based on “It doesn’t matter anymore”, a song that was written by Bacharach/David in 1967. How important is that era for you?
I’m interested in the early space age of the late sixties and early seventies… I’m unsure why… I think it was a reaction to punk, I was growing up reacting to the post punk boom my older friends were part of.