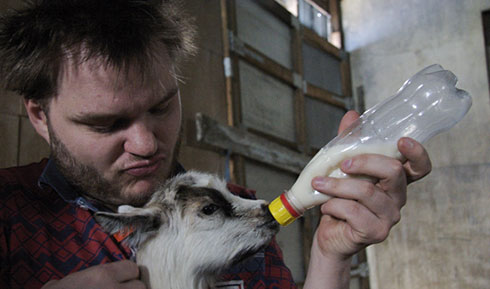 What are the first things you associate with Stuttgart?
That it is a city in Swaben, and my name (Svavar) means: A man from Schwaben!!! That is awesome and I just want that on the record. And also Ásgeir Sigurvinsson, Icelandic Footballer, played for Stuttgart in the 80’s… But I’m much more important!!! Also, the name of the city kind of sounds like „party garden“ in Icelandic („Stuðgarður“).

Please describe your most embarrassing moment on stage.
Once I lost a bit of control for 20 seconds and told the audience to shut up please. I raised my voice at them and I felt like I had just shat myself. Also once I played half a gig with my penis hanging out of my fly… But that was on purpose…

Can you list all the things you lost on tour?
Lost and found: My passport, my wallet, my cell phone, my girlfriend, my ukulele, my dignity.
Lost, never found: Emotional virginity. I was roughly mind fucked once.

We’d love to hear from you that your latest record isn’t your best one.
I couldn’t say, they’re all unique. Besides, I think everything I do is god’s sperm, so I think all my stuff is equally awesome!

Which was the last movie you saw in cinema?
The other guys. Mixed review… But Will Ferrell is a beautiful human being…

Which was the last album you bought?
Kimbabwe by Icelandic wonders Retro Stefson! They are my heroes and I love them.

Which was the last book you threw into the corner?
I juggle phonebooks sometimes, to show girls how I am the perfect mix of strong, agile and intelligent… But I think the Da Vinci Code was a book I found immensely boring and predictable. „The butler did it“ indeed.

Which song makes you run on the dancefloor?
So many songs!!! Thai Rapper Joey Boy really grabs my balls. Also anything from the 80’s. I’m very quick to dance! I just love to feel my body move to the groove…

The world’s best live club?
My friend Aðalsteinn’s living room with a guitar and an upright bass, ready for a fight!

If your music was food, what would it taste like?
Whale meat… Raw…

Are the Beatles overrated?
No, definately not! Go Hamburg! But neither are the Rolling stones!

Your greatest mental defect?
I have a big problem with being always crazy positive… It annoys people sometimes…

Which question do you absolutely want to be asked?
Why do you always want us to sing along to your songs, even if people are no good at singing?

It’s no secret that you don’t like Denmark, so which is your favourite country and why (besides Iceland)?
My favourite country? Everyone but Denmark! Dang!
But Germany, France, New Zealand and Canada are in the top four. Basically because the People there are just the most awesome folk I’ve met. Germans really listen to your songs and are amazingly philosophical audiences, Canadians are super friendly, New Zealanders are super relaxed and the French are… well just so damn French and adorable! I mean, where in the world can you find balding men with their hair all over the place and still being super sexy!