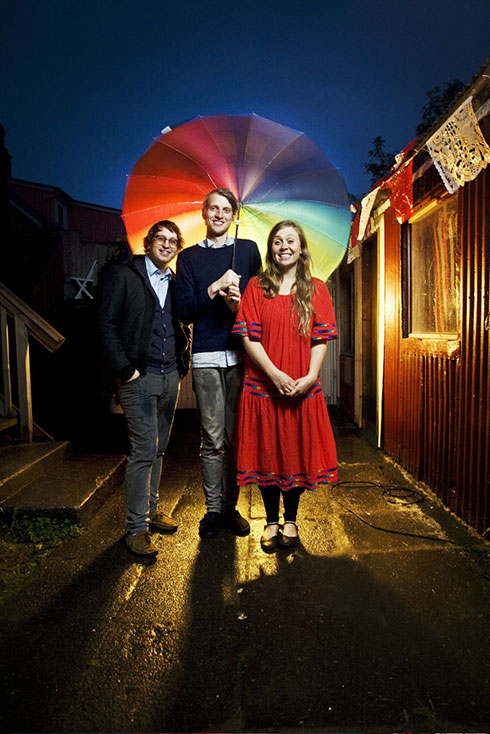 What are the first things you associate with Stuttgart?
Ásgeir Sigurvinsson, an Icelandic football player that played with Stuttgart. Everyone in Iceland were so proud of him.

Please describe your most embarrassing moment on stage.
Once we were playing and didn’t realize that the sound engineers had plugged us through the light system in stead of the sound system.  This caused some electric meltdown and we had to stand on stage and say lousy jokes for 10 minutes. It wasn’t exactly embarrassing, it was just a bit frightening.

Can you list all the things you lost on tour?
A couple of bow ties, a plastic ruler with a picture of  elephants, passport, blue book, a pillow, Nintendo DS (it was later found on an airplane) and a hard drive (also found on a plane).

We’d love to hear from you that your latest record isn’t your best one.
We’ve only made one record. I hope it’s not the best one.

Which was the last movie you saw in cinema?
Órói, an Icelandic movie. The last movie I saw on video was Goodbye Lenin.

Which was the last album you bought?
Hátindar by Insol. It’s Insol’s greatest hits. Kimi Records can probably help you if you want to buy a copy.

Which was the last book you threw into the corner?
The Alchemist. I couldn’t finish it because it was like some disguised new age self-help book. But I didn’t really throw it into a corner. I put it quietly back in the bookshelf.

Which song makes you run on the dancefloor?
House of fun, with Madness. Puttin‘ on the Ritz will also make me run to the floor. Unfortunately they are not Dj favorites.

The world’s best live club?
I’m going to guess that somewhere in Japan there is some crazy club decorated from floor to ceiling with someones lovely artwork. And the music that get’s played there is Japanese speed metal and everyone in there is dressed like they have nothing better to do all day than pick out their outfits. It’s probably the best one. I’m almost sure of it.

Why are your concerts the best ones?
They are not the best. Flaming Lips concerts and Dan Deacon concerts are the best.

If your music was food, what would it taste like?
Blueberry cheesecake with strong coffee.

Are the Beatles overrated?
Nope, if you can make so many people scream you can’t possibly be overrated.

Your greatest mental defect?
I get easily scared and paranoid for no reason at all.

Which question do you absolutely want to be asked?
If your band name wouldn’t be FM Belfast, what would it be?

Will you drop your pants in Stuttgart?
Natürlich.