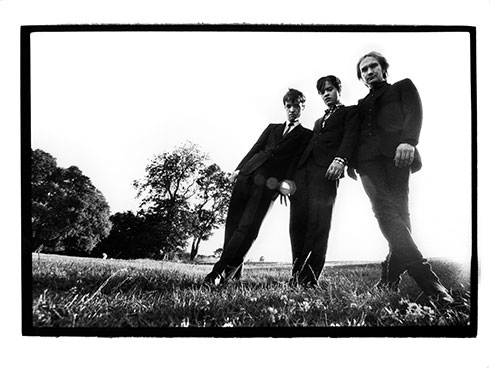 What are the first things you associate with Stuttgart?
I think of cars as I believe it’s where the car was invented and where Mercedes is based.

Please describe your most embarrassing moment on stage.
I’ve occasionally said the wrong things on stage by accident! There’s video footage of me on youtube from a gig in Newquay, UK saying `Good evening` when it was clearly in the daytime on a sunny beach which was funny. I also said `Hello Milan’ when we were in Rome which was a bit of a blunder…..

Can you list all the things you lost on tour?
I generally don’t lose too much but it can be easily done especially on tour when your moving from place to place. But some things I have lost: a handmade scarf, a cheap spare guitar amp and a bag of brand new guitar patch leads are some of the things I’ve lost.

We’d love to hear from you that your latest record isn’t your best one.
Actually it is! I think `Nowhere To Run` and `Finding Out` are some of the best songs we’ve ever written to date. I think having our younger brother Alex involved has turned things on it’s head in a fantastic way.

Which was the last movie you saw in cinema?
I haven’t been to the cinema for a while. In fact I think the last thing I saw at the cinema was `Fantastic Mr.Fox` a Wes Andersen film. I really enjoyed it. I’d like to see the film about Serge Gainsbourg which came out recently.

Which was the last album you bought?
That was `Konono no 1’ by the band of the same name. They’re a band from the Congo who play African thumb pianos. Great uplifting record!

Which was the last book you threw into the corner?
I generally always try to read books that are recommended by friends so generally I’m not disappointed by the books I read. I do remember as a kid reading a Star Trek novel which bored me quite a lot and gave up on it.

Which song makes you run on the dancefloor?
Jackie Wilson `Your love keeps lifting me higher` always gets me going.

The world’s best live club?
We’ve had some fantastic times at The Prinzenbar in Hamburg. That is a great club and so is The Atomic Cafe in Munich. They are the best live clubs I’ve experienced in the world.

Why are your concerts the best ones?
Because we give our shows everything and don’t let the crowd die of boredom. We like to make sure we give our fans the best shows we can.

If your music was food, what would it taste like?
An amazing karahi lamb curry. Very full of flavours and makes you feel better after you’ve eaten it. And you want to go back for more….

Which question do you absolutely want to be asked?
Why do you feel your latest record is your best?

Were the Sixties the best decade?
Very difficult to say, if you meant in terms of rock/popular music I’d say it’s a tie with the seventies.