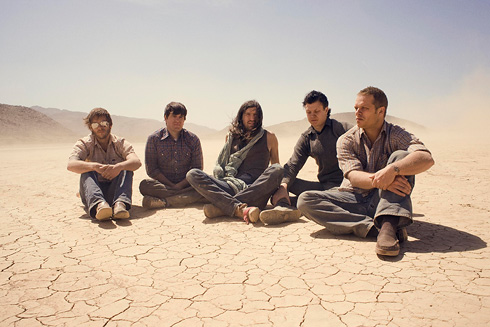 What are the first things you associate with Stuttgart?
I think of Stuttgart being in southern Germany. I also think there are a lot of castles there.

Please describe your most embarrassing moment on stage.
I’m sure I have a lot of these. One time, in Florida, I was swinging my microphone around like a whip. It sort of got out of control, and ended up smacking my laptop really hard. The screen shattered, and the programs I use during our set were basically unusable. Having to get a new laptop was expensive and embarrassing. It hasn’t happened again.

Can you list all the things you lost on tour?
There’s too many to list! I always seem to lose clothes. I don’t think I’ve lost any equipment. I’ve lost cameras and phones and shoes and sunglasses. Things just go missing. Maybe there’s an evil leprechaun following me and taking my things when I put them down.

We’d love to hear from you that your latest record isn’t your best one.
I don’t think I can claim that! So far, In Shallow Seas We Sail is the best. We are really proud of it. I think that the new material we’re working on is even better than ISSWS, so, in the future, it might not be the best record, when looking at the entire Emery catalog. But, right now, it definitely is!

Which was the last movie you saw in cinema?
I’m not exactly sure. I did recently see Avatar. There are a couple other movies I’ve thought about checking out, but I haven’t gotten around to it. I may have seen something since I saw Avatar, but I can’t remember. The blue people in that movie really stick out.

Which was the last album you bought?
This is another one I’m not so sure about. Someone gave me the Ke$ha record. That’s pretty good dance music. I got the Broken Bells single and I like that a lot. I downloaded the new Angels & Airwaves last week. I like the single a lot.

Which was the last book you threw into the corner?
Maybe The Road by Cormac McCarthy?

The world’s best live club?
I like the 9:30 Club in Washington, DC. Also the Norva in Norfolk, VA, and the National in Richmond, VA.

If your music was food, what would it taste like?
A cross between the best sushi and the best tacos. Japa-xican? Mexi-nese? Something in between these. It’d be really good. That’s for certain!

Are the Beatles overrated?
I don’t think so. They might be overhyped, which is different, but they certainly made a huge contribution to popular music, which can’t be overstated. I’m a fan. I think everyone in Emery likes the Beatles. Who doesn’t?

Your greatest mental defect?
Being too awesome? Does that count? I don’t really know. Maybe I like to be too nice to people, and have too much fun. I don’t think that’s a defect, though.

Which question do you absolutely want to be asked?
Do you ever get sick of questions? That’d be good.

Do you think there’s a Hardcore Scene in Germany and if so, which band(s) to you like?
There must be a hardcore scene in Germany! If there wasn’t, bands like Madball and Strike Anywhere would have no place to play and no one to play with! Does Die Toten Hosen count? I know they’re more punk than hardcore, but I dig them.