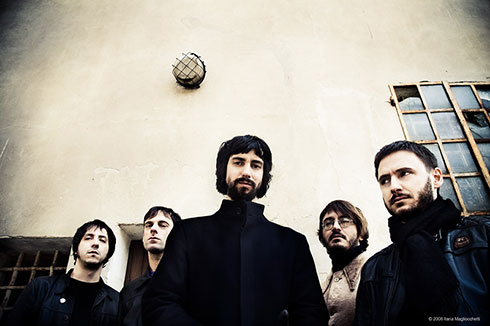 What are the first things you associate with Stuttgart?
The black forest??

Please describe your most embarrassing moment on stage.
Eh eh. Not easy… Well, we like to remember when our then keyboards player in a VERY popular club in Italy just stepped up to the microphone (with no apparent reason at all) saying: „I really hope this place shuts down, it’s really shitty!“. That was quite akward.

Can you list all the things you lost on tour?
At least once every week Andrea (our keyboards player) loses his backbag somewhere. In Amsterdam he left it in the club and the morning after we went there to have it back and all we found was this guy who was there cleaning up and had no intention to get the responsibility to give us the backbag. We had quite a long discussion, but no way, we had to let it go. Fortunately enough we had friends in Amsterdam who were able to have it back and bring it to Italy. We don’t seem to get rid of it, no matter how hard we try.

We“d love to hear from you that your latest record isn’t your best one.
Sorry mate. It REALLY is, no contenders.

Which was the last movie you saw in cinema?
God, me and my lady just had a baby recently and cinema is one of those things that I had to forget about. I remember when she was still pregnant we went to see cheap horror movies, like the remake of „Friday the 13th“. I think the last one we saw was „Gran Torino“, we love Eastwood.

Which was the last book you threw into the corner?
You mean the last one I didn’t like and threw away? I’m unable to do that, I really have to dislike a book to do that, I usually get to finish every book I start. Sorry, mr. Pennac, there go your reading laws :)

Which song makes you run on the dancefloor?
Well, it’s not much used these days, but „Brown Sugar“ by the Stones ALWAYS gets me in. But for dancing I’m really into black music. Anything by James Brown or from the Motown catalogue will do the job.

The world’s best live club?
I guess I still have to see many good clubs. I really love the Union Chapel in London, even though it’s not really a live club, is it?

Why are your concerts the best ones?
When we’re in a good night we five just play as one. There are many good musicians around, but being a band is different. After all these years we are often able to perform like we were a single living entity, and you don’t learn that in school.

If your music was food, what would it taste like?
Wow. There is a very special ice cream that they only do in Puglia, in the south of Italy. It’s called „3 Nocelle“ and it’s a multi-layered, stratified bomb of pleasure.

Are the Beatles overrated?
I really don’t think so. They were so good on so many levels there is no way to overrate something like that.

Which question do you absolutely want to be asked
„How do you feel like being in the most successful band in the world?“. Of course nobody ever asks that.

Which italian band (apart from yourself) do you consider us to listen and why?
Giardini di Mirò are doing really good music, these days. Actually I like them more now than before. They’re supposed to have a name in Germany, so you should know them already. There’s an amazing new band from Bologna called Buzz Aldrin. Their live set is pure fire.