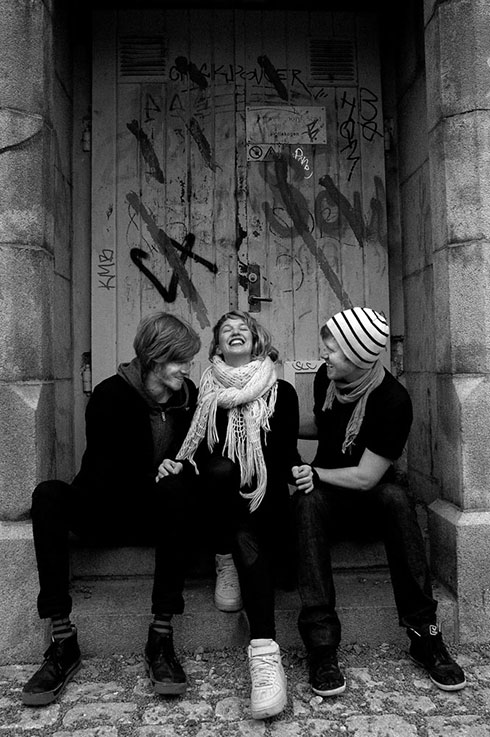 Please describe your most embarrassing moment on stage.
Kalle: Hmm, I don’t get embarrassed that much on stage… maybe when I played totally wrong in the beginning. I have to go way back to remember something embarrassing, but, hahaha, I do remember when I was playing in a metal band, Kurt Jarls. We were playing an intro to a song (which we thought was pretty cool) and my part was striking an E after two bars. I thought it was a thunderous chord and wanted to make it as impressive as possible, so I got up on a chair, to be able to jump down as I stroke the chord. The whole thing was filmed and watching the result was…. well quite embarrassing. There I stood, stiff as a pine tree. Not so much jumping down in a spectacular stile, as more or less falling down in slow motion. There was nothing thunderous nor impressive about the whole move! Uuuh, hehehehe. Good idea, bad performance.
Siri: Ohh that’s a hard one, I try to forget all the embarrassing things that I’ve done, well one of the most embarrassing things that has ever happened to me on stage was probably when we played at a festival in Germany and two really drunk guys came up on stage and started dancing and at first it was funny but then when they did it for the 3rd time it got a bit irritating and embarrassing not for us but for them hahaha.

Can you list all the things you lost on tour?
Kalle: Actually not that much if you don’t count being stolen from. I’ve lost a charger to my Händy, maybe a t-shirt here and there but that’s pretty much it. On the other hand, some stupid fuck-ups broke into our car when we played at a festival in Sweden, stole both my guitars and Johans bag which was filled with beer. They must’ve been retards since they didn’t grab Johans synth which is pretty much more expensive than those ten beers…
Siri: Not that much at all actually, except for my dignity when we all (me and the guys in the band and our crew which are all guys) decided to spend one of our days off in a spa that turned out to be a nude spa. So we had nothing to do but to take our clothes of and jump into the saunas. That was funny and it definitely was an eye opening experience hahah.

We’d love to hear from you that your latest record isn’t your best one.
Kalle: That depends on which of our records is the latest one? I don’t consider Hymns in the key to be our best one since we have an EP finished that isn’t released yet, that one is probably our best one so far ;) And I also think that we have an album coming up that will be even better! First recording session starts on Monday and I’m extremely excited.
Siri: I agree with Kalle I think that the new album will be amazing and also the latest EP is spitzeclasse.

Which was the last movie you saw in cinema?
Siri: Hmmm long time ago but I guess it was a small independent movie at the film festival in Gothenburg. Don’t even remember it’s name haha.

Which was the last album you bought?
Kalle: Lykke Li (latest and only album), The Deportees (their latest, check it out!) and a two-disc best of with Judas Priest.
Siri: Vinyl with Bruce Springsteen (Darkness on the edge of town), Vinyl with German hip hopper Jan Delay and some records with Neil Young.

Which was the last book you threw into the corner?
Kalle: I read a book by Ali Smith the other week. It was kind of promising but ended most irritating. The last book I read was by a swedish giant, Per-Anders Fogelström and I would like to throw that one up on the best selling lists. It’s five pieces, all of them about how it was living in Stockholm from 1780 to 1960, where you follow some working class families and their destinies. Extremely nice! If history ever would be presented in school in that way, what a success wouldn’t it be?
Siri: Book by swedish writer Sture Dahlström (Den Galopperande svensken). Wonderful amazing and brilliant author and an amazing book. Love it love it love it.

Which song makes you run on the dancefloor?
Kalle: „Beat it“, „Blinded by Fear“ (At the Gates)
Siri: Anything with Michael Jackson, „You can call me Al“ (Paul Simon), anything with N.E.R.D but especially „Lapdance“ and „She wan’t to move“. I think they are brilliant songs, mmmm love em. M.I.A „Bamboo Banga“ and many,many moooorree, I like to dance :)

The world’s best live club?
Kalle: I’m not sure if we have played there yet..? I would say that many of the German ones that we’ve visited are really good, especially Hamburg’s Üebel & Gefährlich. Hard to beat the feeling of playing in an old bunker.
Siri: Looking forward to see it, haha, but until then I would have to say Üebel & Gefährlich as well, amazing venue and wonderful people.

If your music was food, what would it taste like?
Kalle: Something with the sweetness of sugar, the acid from lemon and the spicyness from a chili pepper.
Siri: Creme Brulé cause it’s the best, hahaha.

Are the Beatles overrated?
Kalle: In a way yes and at the same time no, not at all, quite the contrary! Every band that are put on such a hype level as the Beatles have to be overrated, they are/were of course bastards from time to time too AND they have done some pretty bad songs as well. On the other hand, I can’t come up with another band that has done so many records/songs in an equally long period that are so persistent of time. I also like the fact that they evolved so much during their career, from a very young and a bit polished boy group to a brave and intelligent pop/rock band. That’s very impressive if you ask me.
Siri: No, I think they are amazing.

Your greatest mental defect?
Kalle: I think I’m a bit authistic sometimes… I can be so indulged in myself sometimes, being very satisfied with just me, the guitar and recording equipment. Probably a bit socially boring… but when I socialize I tend to do it quite well!
Siri: Ohhh, that’s a tough one, hahah. I’m sure that my friends could answer that much better than me. But it might be that I can be toooo proud when it comes to people telling me what to do. I don’t like when people try to push me around and I don’t like to be treated like a little girl that people feel that they need to take care of or tell what to do. I can’t handle situations like that cause I’m to proud. And I also think that I could be better at controling my emotions cause I’m really emotional and always let my heart instead of my brain to tell me what to do, one of my friends explained it like I was emotional roadkill, hahaha. I thought that was funny.

Which question do you absolutely want to be asked?
Kalle: World economics, something about the environment or our society of today. Why is the human race so often fucking things up…? How come there still is war on this planet, it’s been tried for too many hundred years by now.
Siri: Hmmmm probably something that hasn’t got to do with just music something funny to just discuss :)

Do you have in mind to cover a Cannibal Corpse song sometime in the future?
Kalle: Yes, I do mind. I stopped thinking CC was interesting, when I heard some of those spoken intros on an album (was it Mutilating the Tomb…?), I don’t remember. It wasn’t cool at all so I totally lost respect for them as a band. Today I can in a way appreciate that they tried to do something more brutal than ever done before but why not do that with a more intelligent message…?
Siri: Don’t know.